Home»Electricitate»10 years in Romania: EDP Renewables is highly committed to ecological transition and its local communities

“EDPR is committed to Romania as a market and hub for technological development,” said Eduardo Nieto, EDPR’s country manager for Romania. Nieto shared some thoughts with us a few days before the celebration of the Portuguese company’s 10-year presence in Romania. EDP Renewables is both the third largest producer of green energy and the largest non-integrated renewable energy producer in the Eastern European country.

Mr. Nieto, what contributions has EDP Renewables made to the Romanian energy sector?

EDPR is committed to Romania as a market and tech development hub. Our uninterrupted presence in the country since 2009 is significant evidence of this. We aim to continue developing our projects in Romania at different facilities such as those at Cernavodă and Făcăeni — both of which boast a combined installed capacity of 521 MW and are largely made up of wind power and solar energy. Other projects include the energy storage facility located at Cobadin which was installed back in 2018.

We have a lot of faith in this market as Romania has one of the fastest-growing economies in the European Union. This is further solidified by its entry into today’s labor market, which consists of a new, competitive and highly-skilled generation of workers. 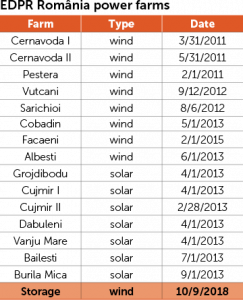 Our contribution goes beyond our presence in the country, along with the generation of wealth and employment that this implies. We are highly committed to contributing to the decarbonization of the Romanian economy, keeping our global objective of reducing CO2 emissions by 90% (compared to 2005) by 2030 in mind.

We also aim to aid the economic development of the communities where we are present through initiatives that drive environmental awareness and foster research and training at local schools.

We also cannot forget the contribution of EDPR’s employees to the overall well-being of the local population—including those who are marginalized—by helping them improve their quality of life through programs such as Closer2you.

How do you see EDPR’s future involvement in the Romanian energy market?

EDPR is open to creating options for growth in Romania by taking advantage of its relevant position in the energy market; these options will mostly depend on regulations.

On October 10, EDP Renewables in Romania will celebrate its anniversary event to mark the journey undertaken by EDP Renewables 10 years ago in Romania. On this occasion, top representatives from the company will present a review of the group’s involvement in the Eastern European country, talk about important moments that shaped its activity and discuss the future of investment projects at both the domestic and European level.