The Ministry of Energy has launched in public debate a support mechanism for investors with low-carbon technologies called Contracts for Difference (CfD), a mechanism in place in some Western countries.

The contribution will be included as a separate item in the final customers’ invoice, applied to all electricity consumers. Expenditures for the implementation of the mechanism will be recognized by the National Regulatory Authority for Energy “through transparent mechanisms, subject to separate monitoring and reporting of the expenditures,” says the Ministry of Energy, in the document published online.

The general principles adopted by the ministry are based on a study performed with the support of Marsh Europe, NERA Economic Consulting and CMS, in a project financed with European money. The Ministry of Energy explains that the CfD support scheme ensures “an investment climate relatively stable for investors”.

How does it work

The Mechanism called CfD works by stabilizing revenues for producers benefiting from it, at a fixed price level known as the “strike price”, which cannot exceed an administrative value , based on estimates of the evolution of the prices of those technologies (“reserve price”). For projects to be subsidized under the CfD mechanism, an ex-ante “reference price” will be established annually, calculated on the basis of average prices recorded on centralized markets in previous years for delivery during the implementation period.

“Thus, within one year, the generators ting the CfD scheme will sell their production on the competitive electricity market and will earn revenue from this sale; if their price on that market is below the fixed ‘strike price’, they will receive a payment representing the difference between the ‘reference price’ and the strike price’. Payments will be made by an entity called Counterparty.”

The Ministry of Energy proposes this Counterpart to be OPCOM, and the auction organizer to be Transelectrica. OPCOM is also expected to calculate the “relevant averages to be used for the CfD reference price”.

The mechanism will be open to all low-carbon technologies (wind, solar, bioenergy, hydropower, nuclear, fossil fuel energy with CCS / CCU – carbon capture storage / carbon capture and utilization technologies). The award procedure involves personalized contracts, negotiated for single projects, where the price will be the main award criterion, based on a pricing algorithm established following a competitive bidding.

Wholesale prices will grow, but CfDs could keep the pace low

One of the most interesting chapters in the document released by the Ministry of Energy is the one that refers to the anticipated impact of introducing the mechanism of Contracts for Difference in Romania. With CfD and without CfD, experts at NERA Economic Consulting anticipate an accelerated increase in wholesale electricity prices by 2030, “almost entirely driven by rising gas and CO2 prices in Europe” – from about 50 euros/MWh currently to over € 55/MWh in 2025 and over € 60/MWh in 2030. The CfD mechanism would, according to consultants, allow for a consistent reduction in wholesale prices from 2030; the pace of growth is expected to resume in 2033, but well below the level anticipated without the introduction of the CfD mechanism. 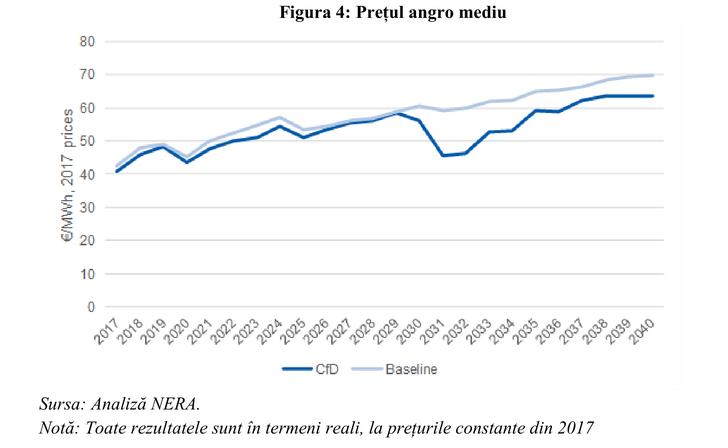 Significant influences have also been calculated in terms of Romania’s electricity export capacity, as well as in respect to the reduction of carbon emissions in the energy sector.