Efficiency, sustainability, enthusiasm and co-creation. These are the concepts that best describe the few hours of the debates under the ARPEE’s “Sustainable Energy Day“, a workshop for understanding ISO 50001 energy management standard for the residential sector. The June 16 conference was attended by over 50 experts interested in tested solutions, as well as representatives of academia and residential associations.

Mădălin Apostol, from OMV Petrom, opened the day with a presentation the OMV Petrom group’s type of involvement in increasing energy efficiency. “There are many discussions on this in fashion topic, but I saw not so many funds allocated to energy efficiency. I think that, first of all, we should talk about a good energy management,” Mădălin Apostol said. To achieve this, OMV Petrom has set a standard of energy efficiency that allows measures to be monitored and evaluated, so to maintain constant and sustained interest from all those involved in the process.

Mădălin Apostol stressed the importance of establishing a culture on energy management. The goal is reaching a stage where “we think about energy efficiency when we choose the materials, when we choose the technologies, when we implement the projects.” Many companies remain at an early stage, where energy efficiency is a concern to strictly comply with the law. The next step it is educating the employees to improve their energy consumption, not only when at work, but also at home.

Gerard Verdebout, president of ARPEE, has mentioned the work of the Association since its launch in March 2013 on three strands: energy policy and strategy, energy efficiency in the residential sector, energy efficiency for the industry. Gerard Verdebout insisted on the European Code of Conduct on Energy Performance Contract (EPC) and on the Eurostat’s guiding notes on the impact of the Energy Efficiency contracts on the state budget. Simply put, according to ARPEE and to other European industry associations, including the European Association of Energy Service Companies (eu.ESCO) and the European Federation of Intelligent Energy Efficiency Services (EFIEES), rules on debt and deficit impede investment in energy efficiency in the public sector. “The rules are a regulatory barrier to the use of private capital for investment in the public sector,” President of ARPEE repeated.

In turn, Serban Danciu, country initiative manager with BPIE Romania, presented some modeling on the investment necessary for improving energy efficiency. The calculations were realized within the project ENTRANZE – Policies to Enforce the transition to Nearly Zero-Energy buildings in the EU-27. According to these calculations, non-residential buildings are more efficient than residential buildings, and minor renovations, with low discount rates, are profitable even now. “Moderate renovations might begin become cost-effective somewhere around 2018”, which is that they will no longer be needing support through grants or aids from the European Union. “Renovation is becoming a profitable business, allowing the involvement of private funds,” Serban Danciu concluded.

In his intervention, Mihai Mereuţă, president of Liga Habitat, campaigned for the house owners to be allowed to directly access European funds for energy efficiency. “Currently, the owner cannot access the funds because it is presumed that he lacks the administrative capacity. On the other hand, we see it clearly what administrative capacity proved dozens of mayors from around the country called to give explanations to prosecutors,” Mereuţă said. Municipalities should not be the only entities empowered to negotiate rehabilitation contracts on behalf of the owners associations, Mereuţă insisted, adding that the Association of Municipalities oppose such changes in regulations. “Owners could do much more work in shorter periods of time, at higher quality”, Mihai Mereuţă explained, because “they are directly interested in the success of these investments”. 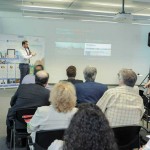 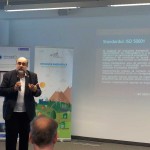 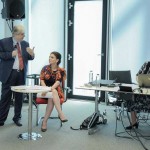 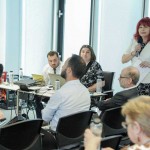 President of Liga Habitat also referred to the house owners associations that should verify all the technical data in the documents based on which the EU money has been spent for improved energy efficiency of residential blocks are correct. Otherwise, a simple control of the European Court of Auditors might enable the European authorities to ask for their money back if “the working does not conform to the project on which the European money were delivered, and if the working did not result in energy savings as the project claimed would reach”, Mihai Mereuţă warned.

Claudiu Butacu, president of the Solar Decathlon Bucharest Students’ Association, presented the new project of the association, after the prototype of the EFdeN house was completed in its location in the 66 Pache Protopopescu Blvd, in the premises of the Faculty of Engineering Plant. This is already the first Centre of Research for the Comfort conditions in Romania. “We adapt an solar energy efficient house, in some key points in the city, in a sustainable step to the nature” – this is the mission undertaken by the EFdeN Association, at the beginning, now, of a new challenge: making the first sustainable residential neighborhood by transforming the prototype awarded at Versailles a modular living space and a commercially feasible project.

Raluca Florea and Mihaela Sarbu, from SGS Romania, have presented the expertise and the portfolio of the Swiss based giant as a contribution from “the independent part which can certify the energy management system”.

“We have more and more requests from those who have leased spaces in large buildings, such as tower blocks,” Mihaela Sarbu, business manager of Environment, Health, Safety division at SGS Romania said. She insisted on the needs the tenants of new buildings are more and more aware of – services on the quality of the indoor environment.