Home»Renewables»Biomass»Energy efficiency: increased productivity or how to do more with less (Brasov, Oct 19) 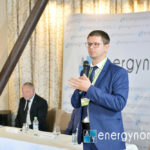 Immediately after coming back from Brussels, where he attended a similar debate, Costel Mihai, deputy mayor of Brasov, Costel Mihai, deputy mayor of Brasov, underlined that energy efficiency is a priority for the municipality. “We already have Braşov Metropolitan Agency (AMB), which monitors all public institutions in this respect, and for some of these institutions we have come up with concrete action plans. Next month we will approve in the Local Council the local heating / cooling strategy of Brasov,” added Costel Mihai.

Marius Cătălin Lepinzean, Business Development Manager at Phoenix Contact, mentioned two of the directions of action that the German group has in Romania. Founded in 1923, PHOENIX CONTACT Gmbh & Ko is a leader in the field of electrical component manufacturing and industrial automation technology, and in 1928 Phoenix Contact invented the terminal block (RWE clamp) for the German electricity company RWE. With 15,000 employees globally, the Phoenix Contact group has an annual turnover of two billion euros. “What Phoenix Contact proposes is this mix – starting from components, through integration of the solutions and implementing some ideas through appropriate technical solutions,” explained Marius Cătălin Lepinzean. Along with its partners, the company has implemented in Romania efficiency solutions in the production infrastructure, such as power conditioning, energy management, lighting control.

We have fruitful collaborations with 4 or 5 companies, that is, we have already built and installed some stations, Marius Cătălin Lepinzean

An important segment of the company’s activity is also electric mobility, an area which is not so developed in Romania, but which has great potential. “While we do not produce turn-key stations, we support system integrators in Romania to build such stations. We have fruitful collaborations with 4 or 5 companies, that is, we have already built and installed some stations,” Lepinzean said. Such companies, with the support of Phoenix Contact, offer integrated solutions – both the stations themselves and the networks and hardware / software architecture necessary for data transfer and complex network administration.

At present, the main beneficiaries are small or larger companies who want to install electric charghing stations in their car parks or other spaces they own: supermarkets, hotels, office buildings. Marius Cătălin Lepinzean also mentioned some plans for creating national networks of electric car charging stations.

Andrei Ceclan acts as Senior Energy Advisor within Servelect and he presented solutions offered by the company, covering the entire chain from generation, transport, distribution, network connection and up to the specific energy quality solutions, monitoring systems and energy audits. The case studies he presented have covered efficiency actions at minimum or zero costs (awareness and behavior change), but also some with high impact: process adjustments (for example, temperature control and standby duration of brazing furnaces), or technological update (furnace thermal insulation, variable automation and operation, reactive energy compensation in photovoltaic parks or local cogeneration).

Andrei Ceclan has shown that Servelect is also involved in implementing efficiency solutions for filling stations, as well as in optimizing the consumption of buildings, with respect to ventilation and air conditioning, lighting, where a reduction in consumption of 15 and up to 35% can be achieved, at the same or increased comfort.

Another strategic direction of Servelect is provisioning of Urban Energy Management Service for cities in Romania, the most representative case is Cluj-Napoca.

Through CREESC (Resource Center for Energy Efficiency and Climate Change), Servelect is also involved in the energy management of Cluj-Napoca. “Companies, governments and public institutions have a cumulative share of 28% in the total electricity consumption of the city,” said Andrei Ceclan. He listed the main identified action areas for which support is provided for increased energy efficiency: district heating (grids insulation, distributed micro-cogeneration), transport (electric buses, injection of photovoltaic energy in the traction network, energy recovery after braking, compensation of the capacitive intake) and public buildings, among which schools are a major focus. 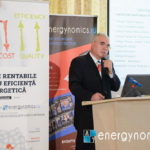 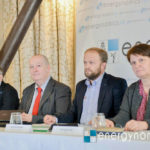 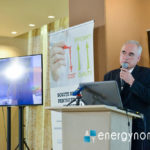 Servelect presents itself as an engineering and energy services company that proposes sustainable solutions, with courage in development, to increase the profitability of the beneficiaries by energy efficiency. Andrei Ceclan briefly described Servelect’s way of working: “We start with a free evaluation at the client location, we identify solutions and validate them with the client, we determine what realistic expectations can we have, and set a plan for measuring and verifying the savings. Then, we implement them using resources from our own, the client’s or from third parties, and monitor on a long-term the achievement of results”.

Ovidiu Stoian, sales manager Contempo Cars, presented the electric cars of the BMW Group – i3 and i8, and how they are produced as part of an integrated approach to environmental responsibility and commitment to reduce electricity consumption.

BMW’s electric cars were designed to be used in crowded cities; they are small and easy to park, come with low energy consumption, with some of the smallest noxious emissions and noise pollution.

According to the Association of Automobile Manufacturers and Importers, in the first semester of 2017, the number of electric and hybrid cars sold in Romania reached 982 units, compared to 311 units in the same period in 2016. Electric car sales (BEV, EREV, PHEV) increased by 197%, while for hybrids there was an increase of 218.1%. Just in June, 265 electric and hybrid cars were sold, up 56.08%, compared to the previous month, when there were 169 units sold. In the ranking of the most traded 100% electric cars, in the first six months of the year, Mercedes-Benz occupies the first position with 32 units, followed by BMW (29), Renault (12), Audi (8), Volkswagen and Volvo (five units each), Mitsubishi and Porsche (four units each).

Energy management in the city of Cluj-Napoca

Ştefan Opriş, Marketing Manager at LISSCOM, presented the smart energy management system implemented in the city of Cluj-Napoca. The LISSCOM-Braşov company provided the concept, execution, assembly, service and maintenance of a city-level system for the management of thermal energy in 73 buildings (schools, universities, dormitories, canteens, sports halls, kindergartens, block of flats) coordinated from a single data center by a single operator.

The system allowed for significant savings on energy consumption, but also for administrative savings.

Based on the data from the National Institute of Statistics and INCD URBAN-INCERC, the Lisscom representative highlighted the differences between the energy performance of buildings in the public education system (354 kWh / sqm / year) and those of the other sectors (200-250 kWh / sqm / year).

These are figures that, simply by themselves, suggest that the administrators of these buildings – from school principals, mayors and municipal energy managers – should decide to modernize energy systems with cost, efficiency, safety and convenience benefits for all the parties involved.

Financing for energy efficiency in the residential sector

The facility supports the transition to the green economy in Romania with a € 70 million funding for energy efficiency and small capacities renewable investments. GEFF is a product of the European Bank for Reconstruction and Development (EBRD), with the support of the Global Environment Facility (GEF) and the Taiwan International Cooperation and Development Fund (TaiwanICDF). 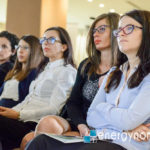 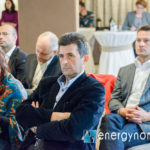 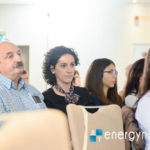 The first Financial Participating Institution (IFP) in Romania is Banca Transilvania, which has 40 million euros for GEFF mortgages for the purchase of new energy-efficient housing and for GEFF consumer loans for the acquisition of energy-efficient eligible technologies.

Mark Velody pointed out that GEFF is a program dedicated to individuals and encouraged the people in the audience to visit the facility site or to contact Tractebel Engineering by sending an e-mail or through help line 031 22 48 104.

In his speech, Romulus Berdei, General Manager of Control Point, a company from Braşov, focused on solar power solutions. With over 50 industrial projects completed in Romania and many European countries, Control Point has proven extensive competence in design, installation, commissioning, maintenance and inspection of industrial automation systems, as well as in green power generation systems for retail, industry and office buildings.

Three case studies made by the Control Point team (Media Galaxy Braşov, BricoDepot Braşov, Dedeman Braşov) showed the strong decline in installation costs of photovoltaic systems and provided indications of the cost of the energy produced, the level of investment and the depreciation period.

Nicoleta Ion presented the opportunities that SMEs and Start-ups in Romania have through the START2ACT, a project funded under the European Union’s research program Horizon 2020.

“A key area of intervention for increased energy efficiency through behavioral changes is represented by office equipment, which has the largest increase in energy consumption in the business area,” Nicoleta Ion explained. Office equipment consumes 15% of the total electricity used in offices, and the trend is that this share will increase to 30% by 2020. Even though SMEs are not yet subject to a legal obligation to conduct an energy audit once in 4 years, achieving energy savings through cost-effective or costless measures (behavioral changes) should be aknowledged as an asset for SME owners and managers.

ENERO is a consulting center based in Bucharest that can offer free assistance through a so-called “mentoring program”. The first visit is devoted to an assessment of energy consumption and translates into implementing fast, cost-free measures, Nicoleta Ion explained. The next two visits have the objective of identifying opportunities to reduce consumption through low-cost measures, and more costly measures, respectively. 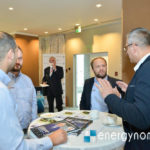 All start-ups younger than 5 years are eligible in this free program and they are encouraged to contact ENERO at start2act@enero.ro or nicoleta.ion@enero.ro.

The speech sessions ended with the presentation from the representatives of Transilvania University of Brasov – professor Sorin Moraru and associate professor Adrian Dănilă. They presented CON-INTEL – a system of measurement and transmission of energy parameters collection points, the result of a research project realized by Transylvania University of Brasov and Electroprecizia Săcele within the National Program of Scientific Research PNIII – 2016.

Associate Professor Adrian Dănilă briefly outlined the technical details of the research. The research emphasized that the implementation of the real-time smart metering at the home area network rise concerns about the end-user privacy and leads to a significant increase of the initial and maintenance costs of the smart grid.

The solution proposed by the researchers is an integrated multi-utility smart metering system (electricity, water and natural gas) through an architecture that allows real-time restriction within the local network at the client level.

Among the advantages presented there are:

A prototype of such a smart meter have already been built and it can be produced by Electroprecizia Săcele. Constantin Zavarache, former general manager of the company and significant shareholder, underlined that Electroprecizia is ready to provide smart meters in order to support the efforts of electricity and gas distributors to complete the ambitious unrolling of smart metering in Romania.

Our Energy Efficiency Conferences in 2017