Few hours after we published this article, information emerged that Sorin Boza was replaced from the position of President of the CE Oltenia Directorate by Daniel Burlan, previously responsible for coordinating the Prevention, protection and safety at work Department. Daniel Burlan will have an interim term of 9 months, writes InvestEnergy, and Sorin Boza will remain a member of the Executive Board until the end of his term, October 11, 2020, according to Financial Intelligence.

The estimated average selling price of CE Oltenia was higher, in 2019, than the weighted average of bilateral contracts calculated by OPCOM for the entire market. However, the price obtained by the coal-based producer did not fully cover the cost of production including the price of CO2 certificates. That is why, after the over 1 billion lei loss in 2018, CE Oltenia expects “certain losses” in 2019, as well.

The financial result for 2019 will be known near the end of April, said the general director of the CE Oltenia Sorin Boza. “We will have certain losses, exclusively due to the evolution of the price of CO2 certificates”, said Boza for Energynomics: “Due to the dysfunctionality of the electricity market in Romania, with mono-fuel producers having relatively balanced market shares, in which CE Oltenia has the marginal price, the price we got did not fully cover the production costs, with the price of CO2 certificates also included”.

According to e-nergia.ro, a document drafted by the Ministry of Energy in October 2019 forecast for EC Oltenia an annual gross loss of 1.2 billion lei, with 1.6 billion lei spending for the CO2 certificates.

Major pillar with billions worth losses

In 2019, CE Oltenia produced approximately 12.4 TWh and delivered in the national energy system (SEN) over 11 TWh. The average selling price of the CE Oltenia is higher than the weighted average of the prices in the bilateral contracts calculated by OPCOM for the entire market (ROPEX_FM_2019), Sorin Boza told us. The reference communicated by OPCOM was 237.32 lei per MWh, in 2019, up by 19.82% compared to the same indicator in 2018. The highest monthly average price calculated by OPCOM was recorded in December 2019 (245.75 lei/MWh), and the lowest in June (223.55 lei/MWh).

CE Oltenia covered a market share of over 20% in 2019, the company announced, while in critical periods it reached market shares of over 30%. This share in covering Romania’s electricity needs suggests, once again, that CE Oltenia is “a basic pillar of the national power system”, as the company put it in one of its official statements, on January 8th.

At the same time, the anticipated losses in 2019, after the definitive ones in 2018, are clear evidence that the Romanian electricity market does not recognize in prices the essential contribution CE Oltenia has to meeting the consumption needs at national level.

In 2019, “we have included in full the cost of CO2 certificates in the sale price. Unfortunately, our offers at this price got no answer in the markets managed by OPCOM”, says Sorin Boza.

The data consulted by Energynomics, in the OPCOM platforms, show that the offers launched by CE Oltenia in the most important futures markets were all awarded and traded at prices higher or equal to the offer price. We are talking about the centralized markets for PCCB-LE and PCCB-NC bilateral contracts, which accumulate most of the transactions concluded within a month. And it is also about the situation in 2018, when CE Oltenia seems to have been more active in these markets, with over 2.6 TWh sold, with delivery in 2019. Last year, the offers launched by CE Oltenia in PCCB-LE and PCCB-NC were almost non-existent.

Caught in the marginal price trap

Sorin Boza reminded us that the market structure of the Romanian producers is unique in Europe, with mono-fuel producers having balanced market shares and disproportionate production costs. According to the director of CE Oltenia, as it comes with the marginal price, the complex “will never be able to fully cover its production costs, but it would give other producers the chance to score remarkable profits”.

Sorin Boza insists that the price of the certificates does not only affect CE Oltenia, but it is also diffused in the price of all the energy sold at national level, “a paradoxical situation, given that the CO2 footprint of the electricity generated in Romania is below the European average”.

For 2020, CE Oltenia aims once again to sell electricity at a price that covers all its production costs. Boza avoided to tell us what is the average price of the CO2 emissions certificates they take into account for this year – “[this price]is in accordance to our own estimates, but also in accordance to certain predictions made by specialized institutes and companies from the European Commission”, was the reply from Sorin Boza. “Of course, our offers will include this cost, but in the end the price will be determined by the supply and demand”, says Sorin Boza.

At an average price for CO2 certificates of $ 25 per unit, the average production price of the EC Oltenia exceeds 350 lei per MWh – a level almost 50% higher than the average prices in centralized markets in 2019. In the very short term there are not so many options. 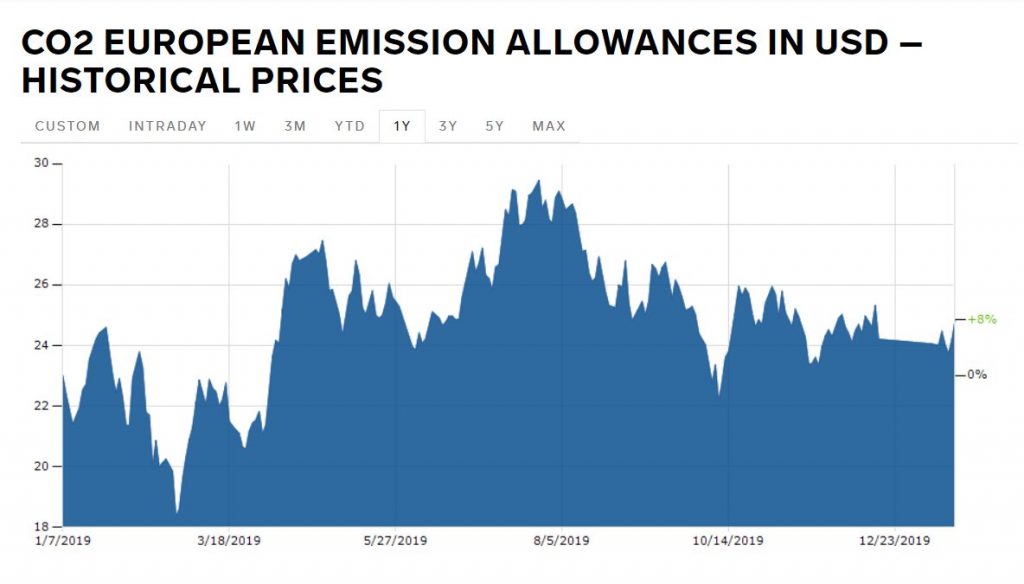 Offering at the production price This approach would reduce the market share of CE Oltenia, in favor of other players, but it would cause the prices to increase all around the way, as the competitors would sell close to this level. A marginal correction could come from imports, at least in times when significant volumes would be available at lower prices. The implications are difficult to foresee, but it is clear that we would have a considerable negative impact on the households, on the energy-intensive companies, as well as on the public administrations. The gains would be important too; financial – in the sheets of other electricity producers, mainly Hidroelectrica and Nuclearelectrica, but also in the state accounts (taxes, dividends, etc.), a forced increase of the interest for energy efficiency, etc.

Such an approach would indicate the true market share of coal in Romania’s electricity production, because CE Oltenia production would be reduced more closely to the real volumes needed at any given moment and close to the financially feasible volumes (with probably not so many groups operating, but most effective).

Offering at a slightly higher level than anticipated average This is what CE Oltenia seems to be doing at present: it voluntarily assumes significant financial losses year by year, waiting for a solution where the cost impact with carbon certificates is mitigated elsewhere. The loss is socialized, but the market prices are maintained at levels considered bearable / reasonable.

This comes with the cost of blocking the energy complex in Oltenia in chronic underfunding, from which it barely manages to pay, and only at the last moment, the CO2 financial obligations, with borrowed money and government guarantees. This also comes with the price of canceling any prospect of reducing the environmental impact or of reorganization / diversification / reorientation (where the investment money to come from?).

In the end, such an approach distorts the data in the market, arbitrarily influences the profits of other market players and prevents any cost of opportunity calculation regarding new electricity generation units in Romania, regarding the extension of the cross-border interconnection capacity, or energy storage, or demand-side management. The low price maintained artificially discourages new projects which are on the border of profitability.

End of last year, it was much ado about a support scheme whereby the complex would be helped to cover, at least in part, but over a several years timeframe, the burden of the cost with the CO2 certificates. Apparently, the ideas implemented in October-December are not supported by the new government, but clear information is still to emerge.

On the other hand, Boza states that he has prepared some plans that “for the time being, cannot be made public”, at least not in detail. “In essence, the CE Oltenia strategy in the short term is to build its own energy generation mix, in order to reduce its specific CO2 emission, on the one hand, but also to diversify and make its sales strategy more flexible,” concluded Sorin Boza, general director of CE Oltenia since October 2016. Since 2014, CE Oltenia has had one year on the black (2017 – 180 million lei), and financial losses totaling 3 billion lei in rest. With 2019, this would get more than 4 billion lei!