With strong state support, the purchase of electric cars increases exponentially from one year to the next, but remains yet marginal in the national fleet of vehicles. Investments in e-charging infrastructure have multiplied, with European money and with the growing involvement of large multinationals. These two tendencies reshape the mobility and the energy sector, complementing the challenges coming with technological advances (digitization, renewables, miniaturization, etc.) and social mutations (such as appetite for sharing against owning). With many open horizons, electric cars are still looking for a clear and secure business model, while gaining more and more adepts and promoters. 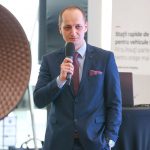 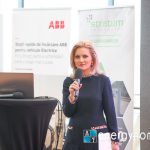 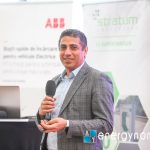 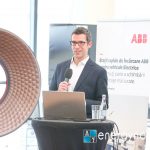 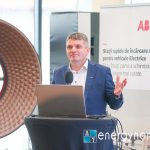 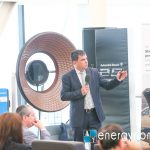 The series of presentations was opened by Andrei Iorgulescu, General Director for Projects within the Environment Fund Administration – AFM.

The official from AFM said that “green” mobility is an important issue for the Administration as well as for the Ministry of the Environment. Thus, both the new conventional cars program – Rabla, and the new electric cars program – Rabla Plus […] and, of course, the charging infrastructure program, which started in municipalities, are financed. “I think we will reach 1500-1600 electric vehicles financed and for the charging stations we have a generous budget of about 20 million euros,” Iorgulescu said. “We have received about 24 files submitted by municipalities asking for 190 projects with over 400 charging points.” At the same time, the AFM will finance economic agents with another 20 million euros for the installation of electric charging stations on national roads and highways. A memorandum is currently on its way of being submitted to the European Commission, and the AFM hopes to issue an investor guide by the middle of the year, so that the program is launched in the second half of 2019.

Andrei Iorgulescu responded to the audience expectations by providing the latest information on the financing program for installing household photovoltaic systems, to encourage the emergence of prosumers.

The world has changed and energy has also changed with it, said Munir Hassan, Head of Clean Energy, at CMS London. “It’s time to understand that and to transform ourselves – the electric vehicle segment responds to both the opportunities and risks of the present.”

More and more market players are focusing on the future of electric mobility technologies: car manufacturers, supermarket and real estate players, technology vendors and suppliers, the public sector and digital app creators. “At present we do not have many electric vehicles. They are yet a drop in an ocean, but figures are rising very fast from one year to the next. For 2030, projections talk about a quarter of a billion global e-cars”, Munir Hassan recalled. 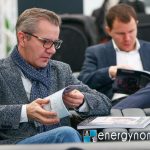 For the time being, the challenges and the unknowns are very numerous – from the legal and regulatory complications, to competing revenue stream models, from the availability of grid connection, to concessions and permits for placing charging stations, to competition between new and traditional companies. But the trend is clear: ever cheaper electric cars and limitations on selling conventional internal combustion engine vehicles.

We need to strengthen the grid and integrate renewable resources

In his speech, Constantin Ichimoaei, Executive Manager with ABB Romania, talked about disruptive trends in re-shaping the mobility and the energy sector, trends that are all challenges for the automotive industry and for the energy sector.

“When it comes to electrical mobility, ABB counts on simple, smart and sustainable electrification,” said Constantin Ichimoaei. “We are talking about urbanization, digitization, integration of electric vehicles and renewable energy into distribution networks, we are talking about green energy, smart production, distribution and consumption, as all these are contributing to zero-emission cities,” he said. Residential and commercial customers, and communities tend to become active participants in the energy revolution by optimizing the use of local resources.

Even since the summer of 2013, BMW and Volkswagen, together with ABB, have inaugurated the first electric charging station in Europe, and in September 2013, ABB and General Motors have inaugurated the first US stations, Ichimoaei recalled. As a pioneer in the e-car technology, ABB has solutions for electrical mobility and energy management in the context of renewable energy integration.

Constantin Ichimoaei also said that ABB is already involved in several electric mobility projects in Romania, whether large networks or single projects. “Unlike two years ago, when we received just a few requests a quarter, now we are asked, if not every day, certainly every week,” he exemplified.

BMW will transfer electric technology to all its classes

As the BMWi specialist with Automobile Bavaria, Marius Răspopa presented the updates on the BMW portfolio, first of all about the i3 model, which battery was upgraded. “We have had many Bucharest-Budapest travels, although i3 is a concept designed more for urban mobility,” he said. “I3 is the greenest solution, as it is the cleanest car all the way, from its production and throughout the exploitation.” 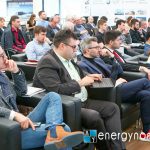 Răspopa pointed out that the success of the electric model “will lead to transferring electric technology to all its classes, including limousines, SUVs and Mini.” “BMW has promised that by 2025 it will have 25 dedicated, purely electric or hybrid models,” said Marius Răspopa.

Established in 2013, Phoenix Contact’s e-mobility division employs now more than 160 employees in product development, said Cătălin Lepinzean, Business Development Manager for Phoenix Contact Romania. The company manufactures components for electric vehicle charging stations. “We created the first connectors in 2010, and over the last few years we have developed both the connectivity and the control part of the station.”

Lepinzean also mentioned the amendment to EU Directive 2010/2018 on the energy performance of buildings, which requires that for new non-residential buildings and non-residential buildings undergoing major renovation, with more than ten parking spaces, Member States shall ensure the installation of at least one recharging point and ducting infrastructure, namely conduits for electric cables, for at least one in every five parking spaces to enable the installation at a later stage of recharging points for electric vehicles.

The Phoenix Contact representative also addressed two of the most common myths in regards to e-cars: range anxiety and high cost. Studies show that “about 90% of all daily journeys made by any type of vehicle are short distances up to 37 kilometers.” These daily habits can be easily answered to by the current battery capacities, and the trend is to accelerate the performance of both the battery and the charging infrastructure. “In terms of battery cost,” Lepinzean continued, “they are constantly decreasing: “from $ 1,000 per kWh in 2010 to $ 210 per kWh in 2018; for the coming years, it seems that the threshold of 100 dollars per kWh is at hand.”

Already the operating costs of an electric car are much lower compared to those of a conventional vehicle, and a fuel cost comparison shows a saving of about 8.5 euros per kilometer with electric propulsion.

Bogdan Cojocaru, Business Development Manager for Stratum Enclosures, presented the charging stations they produce in Bucharest and export all over the world. “In over 40,000 real-time monitored sites, the charging stations from Stratum already produce energy at local level, store it in batteries, and make it available to consumers, mainly telecom companies,” insisted Bogdan Cojocaru. “This is my only regret – Romania seems to have little need of such products and we are in the position to export 99% of our production.”

Stratum Enclosures stations only need grid for back-up, which makes them an interesting option for areas where it is difficult to identify an administrative solution for concession or permits for placing the station, as well as in areas with low availability of grid connection, the available power is too low or the costs are too high.

The trend is that electric mobility uses green energy resources in autonomous stations having their own storage, for not depending on the power grid, Bogdan Cojocaru concluded. “And we produce such charging stations, both on AC and on DC, fully adapted to the needs of each customer!”

Renovatio speeds up the pace of installing e-charging stations

Alexandru Teodorescu, CEO of Renovatio, stressed that the charging infrastructure for electric cars exists, even in Romania, even though only few of us see it. Romania’s first nationwide high speed charging network –e-charge – has risen from 4 units in 2016, to 28 in 2018 and will add four more units this year. “Our estimate is that, this year, we will reach 1,000 MWh charged by cars only in our stations,” Teodorescu said, projecting the evolution of this indicator in the first quarter.

Representative of Renovatio also spoke about a project co-funded by European funds – FastSEE, which will cover over 1,800 kilometers of priority transit corridors in Romania and Croatia. More specifically, over 30 locations in the two countries will have 69 fast charging stations (50 kW DC) and 4 ultra-fast charging stations (minimum 150 kW DC) installed in two years. “Three of these will be installed in Romania – in Timisoara, Sibiu and Bucharest – and they will allow the charging of state-of-the-art vehicles in less than one hour”, explained Alexandru Teodorescu, who also announced the launch of an auction for the installation of these ultra-fast charging stations.

“We will not stop here, we will try to cover as much as possible the local and international transport corridors. In 2019, we want to reach 100 sites and in 2020 we hope to exceed 150 sites, most with fast-loading stations”, Teodorescu said. 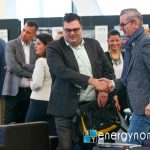 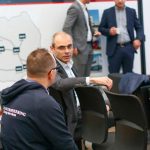 Access to Energy Breakfast Club is open to all professionals in the Romanian energy industry and related sectors, based on the invitation of from energynomics.ro. You are welcomed to write us at office [at]energynomics.ro and ask for an invitation!
Energy Breakfast Club is a meeting of 2 to 3 hours where energy specialists have the opportunity to keep themselves up to date with the latest information and the most influential views on one the hot topics of the moment.
As a host, energynomics.ro will provide – from 09.00 AM – the MC and the coffee, will propose the theme and will launch the invitations for the speakers. They are selected accordingly with their best knowledge of the topic and are responsible for organizing ideas and stimulating intellectual challenges. Presentations will not exceed 20 minutes and are intended to be starting points for a dynamic exchange of ideas and perspectives.
The club closes at 13.
Download Best WordPress Themes Free Download
Free Download WordPress Themes
Download WordPress Themes
Download Nulled WordPress Themes
download udemy paid course for free
download lenevo firmware
Download Premium WordPress Themes Free
ZG93bmxvYWQgbHluZGEgY291cnNlIGZyZWU=
ABB Romania AFM Alexandru Teodorescu Andrei Iorgulescu Bogdan Cojocaru Cătălin Lepinzean CMS Constantin Ichimoaei EBC masini electrice Munir Hassan Phoenix Contact Renovatio Stratum Enclosures
Share. Twitter Facebook Google+ Pinterest LinkedIn Tumblr Email