For the fourth year in a row, energynomics.ro offers an analysis of the financial performances of the energy companies that are subordinated to the Government. Compared to the previous year, we observe that in 2018 the tendency of reducing the number of employees in the 24 monitored energy companies has accelerated (-7.37%, compared to -4.29%). In total, the companies analyzed reached the end of 2018 with just over 41,000 employees, in total, by 30% less than at the end of 2012 (about 63,500 employees). 2018 meant a total turnover on the state energy sector of 21.4 billion lei, the highest since 2011. More important, however, is the fact that the total net profit of these companies declined to almost 2 billion lei, compared to 5.45 billion lei, the record level achieved in 2017; however, the result is better than the total annual profits in 2015 and 2016, respectively.

The most profitable employees in the SOEs in the energy sector

13 of these companies ended the year 2018 in the black, compared to 15 in 2017, and the volume of the total losses rose to 2.42 billion lei, compared to about 789 million lei (in 8 companies) the previous year. The number of state-owned companies that registered profit in 2018 is at the minimum in the years between 2012 and 2017. The total profit of the profitable companies exceeds 4.35 billion lei, 30% less than it was in 2017, when the level of 6.24 billion lei was, most likely, a historical record.

The list in the right is the financial synthesis of the main energy companies owned by the state, reflected in the data communicated to the Ministry of Finance, for the year 2018. We calculated the profitability of the employees as a ratio between the net profit, respectively the net loss, and the average number of employees in the year of reference. All calculations were made in lei.

We have summarized the figures regarding the financial results for 2018 for 24 companies. We excluded the companies in bankruptcy (4), and for the rest, we calculated the profitability per employee using the public available data. 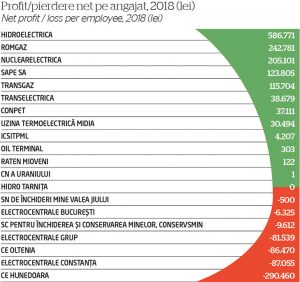 Overall, the profit margin of the energy sector managed by the state goes down strongly (to 9%, compared to 26.5% in 2017), an expression of the strong growth in losses, about 3 times, in 2018, compared to 2017. The companies’ losses represent almost 30% of the cumulative turnover of the energy companies controlled by the Government, almost 10 times higher than in 2017 (3.83%). The reason is the loss from three energy majors – CE Oltenia, Electrocentrale București and Electrocentrale Constanta, which together have a turnover of 4.62 billion lei.

Based on the available data, we can see that the number of employees in the state energy sector decreased in 2018 by more than 7% compared to 2017. At the same time, the net profit decreased by 64%, to 1.93 billion lei. Therefore, the efficiency of the across the sector has reduced drastically to less than one million lei. The individual performances have become more homogeneous, and things seem to be more clear now: the heating and the coal sectors provide the companies in the red.

Only two companies reported profits of over one billion lei each, in 2018 (Hidroelectrica and Romgaz); SAPE SA left this group, after it had, in 2017, in an exceptional context, 1.8 billion lei net profit. At a great distance, Nuclearelectrica (SNN) and Transgaz completes the leading group in 2018. SNN recorded a net profit of 410 million lei, up by 35%, while Transgaz, with 495 million lei (down by 15% compared to of 2017) occupies the third position in the ranking by net profits.

Hidroelectrica had the highest profit in 2018, with a slightly higher number of employees than in 2017, which allows it to record the best profitability per employee: 586 thousand lei. The company continued to capitalize on the liberalization of the electricity market and the increase in sales prices, to obtain record turnover: 4.26 billion lei.

With almost 500 fewer employees in 2018 (5,604), compared to 2017 (6,046), Romgaz maintains its second position in the ranking of profitability per employee (242 thousand lei), even though the profit reduced by 26.4%. The turnover has continued to grow and it was near 5 billion lei, in 2018. The company has collected about 9 billion lei total profit over the last seven years and, thus, consolidates its position as the main generator of profit among the state-owned companies.

Nuclearelectrica continued in 2018 to consolidate its financial data, with an increased net profit and a profitability per employee of 205 thousand lei, by 34% better than in 2017.

With only 27 employees, the Energy Participation Management Company – SAPE remains at the top of the ranking, even though the profit drastically reduced to 3.3 million lei, compared to 1.8 billion lei in 2017. SAPE has a profit per employee of 123 thousand lei.

The natural gas transport monopoly Transgaz, subordinated to the Ministry of Economy, had the second best net profit, although lower (495 million lei), at a constant turnover (1.74 billion lei), close to the historical maximum. The number of employees continued to decrease (-5.8%, to 4,284), which explains maintaining a profitability per employee of over 115 thousand lei. At the same time, Transgaz keeps a very good net profit margin (28.4%), although down from the 32.3% quota, in 2017.

Among rest of the profitable companies in 2018, Transelectrica, Termoelectrica Midia and Conpet are the only ones with a profit per employee of over 30,000 lei.

The second energy transport monopoly subordinated to the Ministry of Economy – Transelectrica has the potential to rank among the leaders, in terms of turnover – 2.67 billion lei, but the profit margin remains much lower. Although on strong growth compared to 2017, the profit in 2018 (81 million lei) is far from those recorded by Transgaz or Nuclearelectrica. Even though the number of employees has increased (by 2.47%), the profitability per employee has tripled, as the profit reported remains far from the levels between 2013 and 2016. The general director of Transelectrica, Marius Carașol, insisted, on the other hand, on the strategic role of the company and put in balance its profitability against the development and investments. “In the first part of the regulatory period, the investments made were at a suboptimal level, and the profitability was above normal, which came back against the company’s behavior in the last part of the regulatory period”, stated Carașol, in – an interview for financialintelligence.ro. “The technical side of the company was ignored in terms of development, investments and especially human resources. The object of activity of the company was ignored and a huge and inefficient organizational colossus was created, to the detriment of the permanent development of the technical side, which is in fact its engine. In this sense, we can say that yes, we need a more flexible company, adapted to its real needs, adapted to its mission of a strategic company at national level – which is ensuring the operational safety of the national power system”, explained Carașol.

Conpet have lost in terms of profitability per employee for the first time since 2011, as the net profit declined by 18.5%; the Midia Thermoelectric Plant – UTM increased its turnover by 8.7%, but lost 30% in net profit. In the general context of the Romanian thermal sector, UTM has a profit per employee of over 30 thousand lei and remains on a praiseworthy 8th position!

Oil Terminal made a very small profit, but it still maintains a turnover of around 150 million lei and almost one thousand employees.

More companies in the red and more important

Seven of the main companies owned by the Ministry of Energy reported total losses of 2.42 billion lei, in 2018, compared with a total of 789 million lei, recorded by 5 companies, in 2017. The cumulated turnover has neared 5 billion lei, more than 10 times higher than the 497 million lei in 2017. With a total of over 20 thousand employees, these state-owned companies seems deep on the way to extinction or in great danger.

The losers come exclusively from mining and thermal sectors, where the failed reorganizations and the macro-tendencies in the last years have implacable effects. The losses from the CE Hunedoara increased strongly to 1.24 billion lei (higher by 62%); even if the number of employees decreased by 26%, to 4,288, the profitability per employee is negative (-290 thousand lei). With a net deficit of 1.13 billion lei, CE Oltenia returns among the for the fifth time in the last six years. The number of employees continued to decline, but at a lower rate (-4.34%, compared to -7.8% in 2017).

Electrocentrale București has entered the red for the first time since 2011, due to the lack of decision in the legal and financial disputes in the Capital. The 11.5 million lei loss is small, compared to the turnover (1.66 billion lei), but the future remains uncertain and increasingly bleak with the extension of the insolvency period. Also in insolvency, Electrocentrale Constanța has been in the red in 2018, for the fourth year in the last 5, with losses of about a quarter of the turnover. In this case, selling the assets has already begun in the hope of rebuilding a functional centralized heating system. Electrocentrale Grup lost over 3 million lei in 2018, at a turnover of 4.2 million lei!

This article firstly appeared in the printed edition of energynomics.ro Magazine, issued in September 2019.

In order to receive the printed or electronic this issue of energynomics.ro Magazine, we encourage you to write us at office [at]energynomics.ro to include you in our distribution list. All previous editions are available HERE.