The most consistent advance of quotations for the energy titles listed at the Bucharest Stock Exchange has been recorded this year for the shares in the field of energy and utilities that offered significant ordinary and additional dividends. Next, the Bucharest Stock Exchange is expected to record in 2018 an evolution quite synchronized to the developed international markets. While some companies are to record profits exceeding the estimations, some others are still dependent on strategic decisions in order to grow, Mihai Căruntu, the head of the Capital Market Department of BCR stated for energynomics.ro.

One of the top performers at the Stock Exchange was Transgaz, for which quotations higher by over 32% were recorded as against the end of the last year, while the Romgaz shares went up by over 22%. They are followed by OMV Petrom, the share of which was directly sustained by the recovery of oil quotations this year, compared to 2016. Based upon an oil price advance of about 30% in the first nine months of 2017, reported to the similar period of 2016, this visibly influenced upon the result of the business line Upstream (controlling the enhancement of the hydro-carbon resources), which reported a result exceeding by ROL one billion that obtained during the first nine months of 2016.

“On the whole, the net profit reported by OMV Petrom was more than double, against the first nine months of 2016, which reveals a very good financial year 2017 and a dividend share for this financial year capable to sustain the interest for the SNP titles on short term”, Căruntu says. 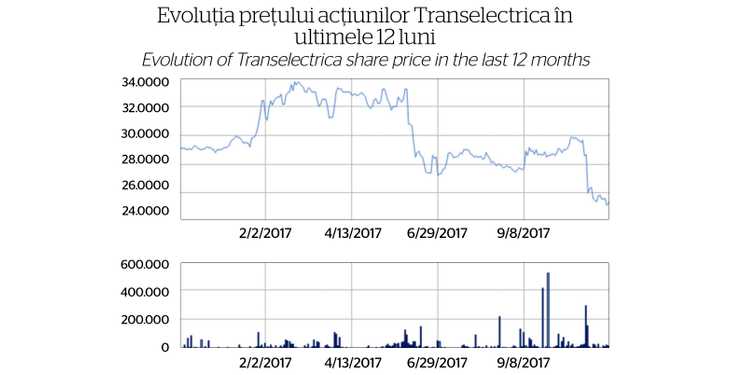 Conversely, notwithstanding the share of an attractive ordinary dividend and an attractive additional dividend, the titles of Transelectrica were negatively adjusted by 11.5%. “This cannot be considered surprising given the net profit adjustment signalled by the results at six months, which were subsequently added the CEO’s statements on the record of losses amounting to ROL 50 million for the third quarter of the technological system services (these are conceived as a zero profit activity by the regulatory authority)”, the BCR analyst states.

However, as three successive reductions of the transport fee were approved at Transelectrica (the main generator of profitability for the company), the resetting of Transelectrica’s profitability is not surprising. Thus, the profitability of about ROL 360 million recorded in 2014 and 2015 or ROL 272 million in 2016 may not be considered tenable, inclusively by reporting to the regulated basis of assets (RBA) and Transelectrica net profit adjustment to a lower plateau is a predictable scenario, in agreement with the budgets of incomes and expenses approved by the company”.

The Bucharest Stock Exchange is dominated by the power producing and utilities companies, accounting for over 60% in the capitalization of the free-float, and an analysis on the efficiency of the stock exchange, especially on average and long term, should essentially have dividends into account. The Bucharest Stock Exchange launched stock indices that count the dividends and provide an accurate image of their contribution to the potential average efficiency that may be accessed by an active investor.

The statistic is as much more relevant as it refers to a longer time interval. The analysis of the time horizon represented by years 2015, 2016 and the interval lapsed from 2017 shows an advance of the BET index of 9.4% and, respectively, an increase by 35% of the BET TR index.

On a hand, the Bucharest Stock Exchange is expected to record in 2018 an evolution quite synchronized to the developed international markets, for which positive moderate evolutions are expected with a plus for the European shares. On the other hand, as it also happened in 2017, we will see essential differences in the evolution of quotations from one share to another, inclusively regarding the dynamics.

“Thus, the main shares at the Bucharest Stock Exchange will be preponderantly connected to their own foundations, then they will be less directly influenced by the general macroeconomic developments, as one could notice last year. The most concrete indirect impact will be, certainly, held by the dynamics of the interests and returns of the state bonds on a 5-10 year term which, when systematically increasing on long term, gradually reduce the appetite for shares”.

The maintenance of the macro stability perspectives, a controllable budgetary deficit around 3% and stability as regards the country risk perception are important for the foreigner investors’ interest into the Bucharest Stock Exchange. Moreover, keeping “alive” the local pensions funds is important for the local call of shares, these holding 15-20% in the Bucharest Stock Exchange free-float and thus being essential for the ecosystem required by the local capital market to be operational.

”A shares market is attractive only when the local investors have a consistent presence, so that the foreign ones may found counterpart when they want to get out the market, otherwise the interest for such stock exchange will be sensibly affected”, the analyst added.

The evolution of the profits recorded by the companies listed in the United States and Europe in 2017 and 2018 is expected to be positive (over 10% increase of the European companies profits in 2017), which is the main argument in supporting the shares markets. The economic growth in the Euro area and the United States forecast for 2017 and 2018 is about 2%, which is a reasonable foundation for the stock markets.

A second element sustaining the moderate-optimistic perspectives for the shares markets refer to the current assessment of shares reported to the return of the Governmental bond for 5 or 10 years. The return of the dividend for the European shares would be over 3%, which is considered attractive, reported to the trading level of the bonds for ten years issued by the Euro area states that have the highest rating (AAA).

The return of the dividend for the S&P 500 index is 2%, against 2.4% – the return of the ten year bonds issued by the American Government, which would not show concrete elements of over-assessment, if the forecasts for profit increases in 2017 and 2018 are confirmed. “This is extremely important since it gets reflected in the increasing dividends shared by the companies, thus, in investors’ possibilities to get access to increasing dividends at attractive returns compared to those related to the fixed revenue tools”, Căruntu says.

This analysis firstly appeared in the printed edition of energynomics.ro Magazine, issued in December 2017.