Home»Analyses»Preventing imbalances on the gas market

A few days of freezing weather have uncovered the lack of flexibility in the national natural gas system and have been materialized in fines (contested by companies), post-factum investigations and, perhaps, a better awareness of the essential role that a functional network code can play in such situations. Serious investments are still needed, as is the improvement of the forecasting capabilities from suppliers, flexible contracts and, most importantly, an integrated and consistent approach from the central authorities.

The latter focused, for many years now, when preparing for the cold season, on imposing the creation of preventive natural gas stocks, which should cover peaks in demand during the, usually, short episodes of persistent cold. Only as an example of recurring approaches, most of the public conversation last Autumn have almost exclusively been focused on providing answers to the question ‘Are there sufficient natural gas in storage facilities?’, with a clear answer from the minister at that time: Yes. “Although the natural gas consumption in Romania has decreased, as some of the large consumers have disappeared, this year the stored volumes increase by 1.6%”, Toma Petcu was stating on 21 November 2017. 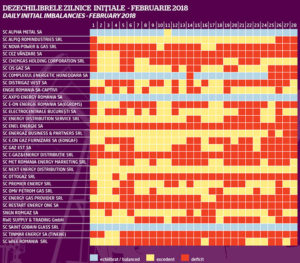 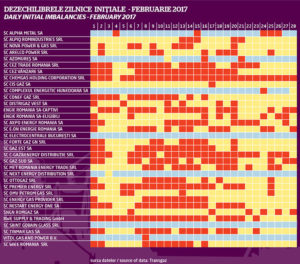 What have we seen in February 2018? After two months of a rather mild winter, we had two weeks which have greatly challenged the national transport system for natural gas. The data communicated by Transgaz show, for February, a daily initial imbalance at the SNT level of 226 thousand MWh per day, resulting from an arithmetic average which includes 16 days of deficit and 12 days of surplus. In February 2017, the same indicator had the value of 55.3 thousand MWh per day (a quarter), resulting from 12 days of deficit and 16 days of surplus. These numbers suggest that the analysis, forecast and preparations focused on the cold season or even on a monthly interval are not detailed enough to guarantee that there will be no problems at daily level!

The most serious issues in 2018 have actually occurred during the last days of the month (25-27 February), when the cumulated deficit had the value of 170 thousand MWh. On February 26, of the 30 network users monitored by Transgaz, 24 showed deficits, four showed surplus and only two were in balance. We must not exaggerate the relevance of this proportion, as the state of imbalance is not the only element that must be considered, but especially the value of the difference between forecast volumes and the volumes actually realized in a certain interval.

On February 26, the Line Pack indicator, showing the effective gas volume present in a system at a certain moment, was at a comfortable level of 45.8 million cubic meters (mcm), slightly above the 38-44 mcm interval labeled as ‘normal state’. Following the unexpectedly high consumption and the insufficient additional volumes that would have balanced the system, the Line Pack indicator dropped to 34.2 mcm on February 28, near the lower limit of the interval defined as a state of imbalance (33-38 mcm). 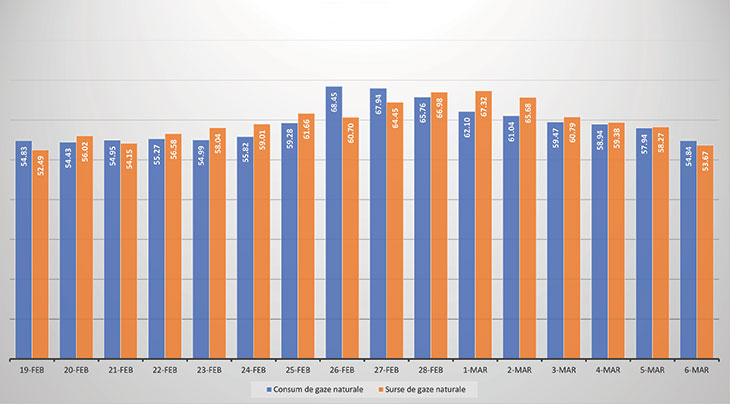 The volumes of natural gas in the reserves were enough, but they could not be accessed in due time in order to avoid the transportation system entering a state of imbalance. A first lesson, mainly for the those responsible with guaranteeing the constant supply of natural gas (Government, ANRE, Transgaz), is that for being ready for winter we should change focus from the quantity of natural gas being stored to ensuring the optimum volume of available natural gas in critical situations.

The objective is to cover the natural gas requirements during the periods (most often days) of maximum demand. Here is a mainly technical issue, an infrastructure which is poorly adapted in order to accommodate the constant production level to the strong seasonal variations in demand. There are also market issues, mainly the lack of flexible contracts, based on multiple import sources. Lastly, there are issues generated by the behavior of the suppliers, which are inadequately disciplined by a functional network code. What are the solutions?

During periods of frost, the current production remains constant, while the demand reaches maximum levels. The compensation of the difference is performed using resources in storage, but this asks for a correlation of the extraction capacity to the moment at which the consumption takes place. The storage deposits held about 500 mcm of gas on February 26, compared to the total 1.8 mcm that were recorded at the beginning of the winter. However, the volumes of natural gas that can be extracted from deposits towards the end of the cold season considerably decreases (down to 14-15 mcm per day) in comparison to what can be extracted when deposits are full, 28-30 mcm per day, respectively.

This cost – in order to guarantee supply during harsh conditions – would be hardly justified during a mild winter! Could the government cover these additional costs, maybe by introducing some form of state reserves? A project developed 8 years ago, presented to the Interdepartmental Working Group for Regional Energy Security issues (GLISE), demonstrates the need for structuring different types of deposits, of which one would by the strategic deposit. The project has not been implemented.

Another idea, which was presented as early as 2010, would be the development of technological storage capacities within existing deposits and attracting the local natural gas producers in placing a part of their production in these capacities, thereby contributing to increased efficiency in the extraction of natural gas. This solution only becomes feasible with a functional code for natural gas storage, which would introduce the storage activity in an integrated, operational market.

The technical solution, economically feasible and without impact on the prices of natural gas, is the development of multi-cycle deposits, the development of storages near the consumer and access to the system conditioned by alternative fuels.

The rest of the additional needs for natural gas on frosty days is provided from imports. There have been days this year when the proportion of imports reached 33% of the consumption (22 mcm per day), the highest level in five years. For a daily consumption of 65 mcm, the internal production has contributed with approximately 27-28 mcm, while the volumes of natural gas extracted from deposits were at about 14-15 mcm.

A solution would be contracting greater quantities from the import supplier, Gazprom, in order to cover the needs during inclement weather conditions. More flexible contracts and important amounts of money blocked in such contracts would be required in order to achieve this. Transgaz, which has the main duty of ensuring the proper functioning of the national transportation system, would probably be best advised to think about and apply such a preventive purchase strategy. The NSO would later recover, at least part of its expenses, from errant suppliers, which had entered into imbalanced positions.

The increase in the capacity to interconnect with regional markets would simplify and decrease the cost of such a strategy and would allow, at least sometimes, the access to natural gas from areas less affected by the frost.

The suppliers are most interested in improving their forecast capacity and for a better anticipation of meteorological conditions, so that based on these estimates they can secure their portfolios. The performances are however uneven and, overall, deficient.

From this perspective, the network code is essential in disciplining market behaviors, through an adequate rewarding for those observing their commitments and by sanctioning those that do not.

“Imbalances occur due to the fact that some gas suppliers purchase less gas than they sell at a daily level”, said Dumitru Chisăliță, for www.e-nergia.ro. “The names of these suppliers are known by Transgaz, which monitors the SNT input and output. The legislative act called the Network Code is the act that should have come with solutions for preventing the decrease of the Line Pack. The Network Code should have prevented such a situation, but it is not operational, thereby allowing the occurrence of such events. […] It’s been the same every winter for the last six years, without any changes.”

The fines administered by ANRE and contested by the companies represent a new opportunity for establishing whether the data held by Transgaz and the operational rules of the market are sufficiently clear in order to encourage and reward the proper administration of portfolios on the natural gas market, sanctioning the accidental or assumed violations. Ultimately, during 2017, the electricity suppliers which have
miscalculated or have made risky bets have been eliminated from the market. Is the gas market just as efficient?

IV. Increase in the capacity for converting consumption

In order to release volumes of natural gas which could be used for covering peak demand, action was taken, including this year, to reduce the activity of the Brazi gas plant and to move the Elcen plants from gas to fuel oil. These solutions are obviously insufficient.

During the last decades, an important reserve was represented by the so-called interruptible consumers, large industrial units which accepted, in exchange for a lower price for natural gas, to cease their activity when required. The number of these interruptible consumers has been drastically reduced during the last years. A long-term solution, to be mandatory integrated in a national economic strategy, would be the stimulation of the formation and functioning of such industrial consumers, particularly considering the natural gas in the Black Sea. A part of the offshore production could become useful in Romania, for industrial consumption and, eventually, under an interruptible consumer regime.

Another long-term solution is the conversion of a part of the natural gas consumption to electricity consumption or to alternative forms of primary energy. The levelling of the consumption curve for natural gas must be included into calculations related to the future mix of power generation, in order to correctly calibrate the required production of electricity from natural gas, as an alternative to coal and the intermittent production from solar and wind sources, but also the impact on natural gas availability during critical times.

Biomass may be a solution, whether we consider organic wastes from agriculture and forestry, from the food industry or from other industries, or if we take into account the organic matter contained by municipal wastes. A biomass law is under scrutiny on the Parliament and encouraging new producers to enter the electricity and thermal energy market can be part of the solution. There is, of course, no unique answer to save us. Preventing imbalances on the natural gas market is a complex and costly process, which takes time and which must involve all those mentioned above and be competently coordinated at a national level.

This interview firstly appeared in the printed edition of energynomics.ro Magazine, issued in March 2018.