Home»Analyses»Iuga, Dudău: Developing the offshore gas sector is a historic opportunity for Romania

The Black Sea could become a new North Sea in terms of oil and gas reserves, but for their exploitation, the fiscal framework needs to be balanced so that the state, society and companies can win, shows a study by experts Radu Dudău and Vasile Iuga at the request of the Federation of Oil and Gas Employers (FPPG). The development of the offshore gas sector is a historic opportunity for Romania, which can bring energy, economic and social security benefits.

“The adoption of a fair and stable regulatory framework for offshore development and production is a strategic imperative. Political decisions to be taken in the coming months will decide on the future of this sector of the fundamental importance for Romania”, according to the study.

Lately, the cost of deep-sea offshore projects has increased. Driving an offshore exploration probe costs an average of $ 100-180 million, compared to $ 5-10 million onshore, but it can also reach $ 250 million.

“This is because machines, platforms, equipment and very expensive vessels are required to operate safely at 2,000 meters below sea level, at 200 atmosphere pressures, in anoxic environments, in areas haunted by violent storms, or with low temperatures”, show the authors of the study.

Investments in the sector are characterized by the long duration (30-40 years), the very high value (10-40 billion dollars), under significant risk conditions. Some companies risk their viability or even their existence with a single project. Understanding and controlling risks are essential for investors and financiers. 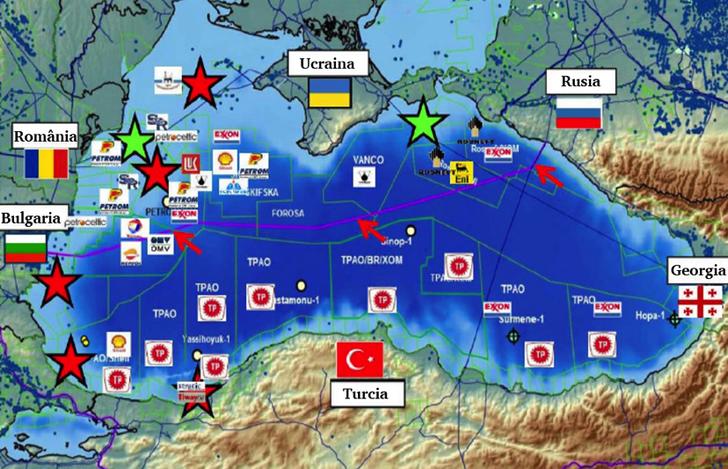 Black Sea projects are under almost all the general risks of deep-sea offshore exploration, among which probes of a 20-25% success rate for Romania, but 0% for Turkey and Bulgaria; the drilling costs of such a drill are between 150 and 250 million dollars; high commercial and infrastructure / logistics risk, in the context of poor connection to regional markets; low project management experience; geopolitical risk in the context of the political-military situation in the Crimea and Eastern Ukraine, and the antagonistic atmosphere between NATO and Russia, with Turkey in a tense relationship with its Western allies.

In addition, there are a large and growing fiscal and regulatory risk, the lack of stability and predictability of regulations.

There are also other risks specific to the Black Sea, including the fact that it is a quasi-closed sea, with difficult access through the Bosphorus, with major difficulties in transporting machinery and equipment; insufficiently known topography of the submarine relief, which is also unstable; anoxic environment at depths of more than 200 meters with the presence of hydrogen sulfide, which requires special, expensive equipment; the presence of methane hydrates on the seabed, which poses a fire risk and a threat to the buoyancy of the ships in case they reach the surface.

“The Black Sea risk map is directly applicable to Romania, one of the most important of which is fiscal risk. The recent draft of Offshore Law significantly increased the degree of unpredictability and it diminished the competitiveness of the regulatory framework. From taxation standpoint, the legislative proposal introduces a progressive income tax, in addition to royalties, depending on the price of natural gas, and also provides for a 60% deductibility limit of the ‘extra’ income resulting from the sale of gas in a prices range”, reads the document.

Moreover, the deduction mechanism and the establishment of the taxable base discourage investments because it does not provide for the deductibility of the expenditure made predominantly before the start of production, but is limited to the investments in the month in which the additional revenue is made without a carryover. Also, the royalties are not deducted from the tax base, as is the case in international practice.

“From a petrological point of view, the Black Sea is considered by many analysts as potentially a new North Sea, the most important energy region in Europe, but this potential is still a predominantly theoretical one, as the geological exploration is still in an early phase (about 100 wells drilled). Important discoveries have so far been made only in the Romanian area. All the Black Sea countries have exploration projects, with Romania, Turkey and, to a certain extent, Bulgaria being most advanced”, writes the study.

“To get to the much-discussed win-win-win situation, of which the companies, the state and the investors to win at the same time, it is necessary that many factors to be met at once. The materialization of a single major risk can break the project chain, as the strength of a chain is given its weakest link. That is why reasonable and realistic optimism is needed with regard to offshore deep sea projects in the Black Sea”, the experts recommend.