Home»Analyses»In Romania, the turbinated water tax is 300 times higher than in France

This analysis focuses on the tax applied to the water used by hydroelectric power plants in Romania. This study also includes information on similar water taxes around Europe and a comparison between them and that applied in Romania. Although set in Romania in 2000 as a small tax meant to raise funds for development of hydro projects, this fee has increased significantly over the years, making it even harder for the hydroelectric producers’ activity.

At the beginning of the ‘90s, the best period in NBA for the Lakers of Los Angeles ended with the rise of the team from Chicago, led by Michael Jordan. After that moment, possibly out of revenge on the Bulls, the State of California implemented a tax for each athlete who would play in the “Golden State”, known as the “Jock Tax” or, as the basketball fans named it, the “Michael Jordan tax”. Due to the fact that this tax generated a lot of money for the state budget, other regions have also set such fees. Today, more than half of the U.S. states have a “Jock Tax” for athletes.

In the category of invented-out-of-nothing taxes one can find the fee imposed by NARW – the National Agency “Romanian Waters” (ANAR, in Romanian) for water used by power plants producing electricity from hydro sources (micro or large scale). True, this is not a fee that exists only in Romania, but it is nonetheless a bizarre cost that hydroelectric producers must pay. Actually, more than 40% of the energy produced from hydro sources in the 27 countries analyzed, at European level, incurs different types of water taxation. 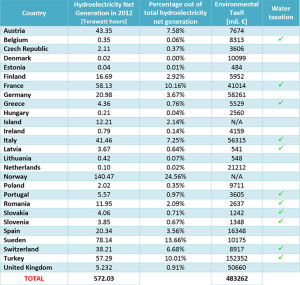 Out of these countries, 11 (9 of which are EU member states) pay different types of fees for hydro power generation, with Romania paying the most for water expenses, according to Hidroelectrica’s (the main hydro electricity producer in Romania) special administrator.

For instance, in France, in 2012, the hydro power plants were obliged to pay a tax of 0.861 €/million cubic meters (cm) per meter drop. For a hydro power plant with a drop of 10 m, the owner must pay approximately 0.00836 €/1000 cm. Taking in consideration the estimation made by Water Agency Adour-Garonne, this means for every MWh produced, the producer must pay an equivalent of 0.421 €. A similar level of payment must be done by hydropower plant producers in Latvia, where 1000 cm of industry water is taxed with 0.0853 €. The water tax in Latvia is an obligation only for hydropower producers with an installed capacity under 2 MW.

Graphed by author based on: Bogdan Popa – Microhidroenergia in Romania

Italy is another European country where a water industry tax is in force, although it has some important differences. Italian hydro power producers must pay annually several water fees. The rate of the concession fee for water use (also payed by other companies that use water for other purposes) – a fixed tax for each region for installed capacity – is set annually. Other two annual taxes are paid exclusively by Italian hydropower producers: one to the municipalities located on the river between the intake and the tail race (in 2014 it was €5.72/kW for installed capacity between 220kW and 3 MW, or €7.6 /kW for installed capacity above 3 MW) and one to the Bacino Imbrifero Montano, a group of municipalities, which are included in the catchment area, only for mountain areas located at 500 m above the sea level (in 2014 it was €22.88/kW, for an installed capacity between 220 kW and 3 MW, or €30.40 above 3 MW).

Until 2000, Romanian hydro producers didn’t have to pay for turbinated water, except those who used dams owned by the Administration of National Water. But in January 2000 things changed and a water tax was implemented for the hydroelectric installations. Specifically, it was established that 1% of the total production costs of electricity be transferred to the Romanian Waters, as a fee for the water used in electricity production.

Although hydropower equipment does not actually consume water, but only uses its transit to produce electricity, hydropower producers are forced to pay as if the corresponding amount was used. Also, the significant alteration of the water quality or wildlife is not a valid scenario either.

One of the unfortunate consequences of this taxation is the decision of hydro producers to discharge the water in the lakes so that they don’t have to pay this fee. Hence, sometimes we deliberately give up the energy potential which is offered to us by the flowing waters.

In an interpellation held in Parliament in 2013, Rodin Traicu, MP in the Commission for Industries and Services (Chamber of Deputies, in the Romanian Parliament), sketched a fair picture of this problem. He mentioned that since ANAR does not record costs with the water used by the hydroelectric equipment, we can’t discuss about a cost of production, be it fixed or variable, direct or indirect.

At the same time, there can be no implicit “contract” in place between ANAR and hydropower producers, since according to any accepted definition, a contract involves rights and obligations for all parties. If the producers from hydro sources are considered final consumers and are obliged to pay this tax, a series of obligations might be imposed to ANAR as well. From this perspective, producers can establish for themselves the necessary volumes of water to produce electricity, while the excess or deficit is supported by the “supplier” (in this case, by ANAR). After all, by discharging the water at certain times, these producers do determine, to some extent, the necessary volumes on their own.

The interpellation’s answer deepens still further the doubts concerning the legislators’ logic, as well as the extent to which it is anchored in economic realities. The above mentioned GD 1202/2010 complies with the Water Framework Directive 2000/60/EC, which stipulates that “the water is not a commercial product”. However, its use by hydro producers involves a real commercial contract. It also states that “the waste of water resources and pollution are sanctioned by applying penalties”. Since the water tax is not a penalty, the legislator admits, indirectly and implicitly, that the producers of hydro sources do not waste or pollute the water.

Also, the state’s answer states that it seeks the cost recovery of water resources without getting a profit. But missing from the text is an explanation of the costs that ANAR incurs with the water and the destination of funds raised, so that the financial balance is 0.

A last inaccuracy of the interpellation’s answer is the statement that, as a producer of renewable energy, “Hidroelectrica […] collects, through the support scheme implemented by the state, significant amounts of cash by receiving Green Certificates”. This information is only is only partially true, because only hydro units with installed capacity below 10 MW are eligible for this support scheme. However, in the response text, the drafters specify that one of the fee’s objectives is “to create financial resources to co-finance national projects or programs in the water sector”.

According to statements made by Hidroelectrica’s special administrator, the state-owned company paid about 320 million lei for water used in 2013, compared to only 80 million lei in 2010, before the tax change. Also, a study conducted by AT Kearney estimates that for each MWh produced, Hidroelectrica pays about €5 for the turbinated water.

In comparison, a simple calculation reveals that Nuclearelectrica (the operator of Romania’s NPP) pays about €2 for the fuel consumed to produce an equivalent amount of electricity. The difference between the two technologies is the fact that once burned, the fuel from Cernavodă cannot be reused to produce electricity, unlike water discharged from hydro turbines.

If we add the problems that all RES producers now have with the sale of Green Certificates, in the context of an oversupplied market and with the new tax for special constructions, we can define more clearly the difficulties facing the hydro energy sector today.

As stated earlier, the water policy for hydroelectricity purposes is a painful subject in different European countries. In France, for example, the water tax had also a steep (although linear) evolution, multiplying by almost five times since 1991, when 1 million cm was charged with the equivalent of €0.176 (in 2012 it reached 0.861/1 million cm). Still, this number is not comparable with the €0.25 /1000 cm tax in Romania, a fee which is almost 300 times higher. Also, a French hydropower producer pays 12 times less money for one MWh produced, with €0.421, than the Romanian does, who is obliged to pay approximately €5.

Although the water industry tax in Latvia is higher than in France (but still 3 times lower than in Romania), the most important element of the country’s specific law is the obligation of payment only for producers from hydropower plants with an installed capacity lower than 2 MW. This regulation may be a difficult thing to manage by small producers, but medium and large hydroelectric producers are excepted from paying lots of money to the National Water Association.

The funds collected from hydropower producers are intended to develop important “national projects or programs in the water sector”. Despite this argument, the solution of raising funds to save or just maintain a satisfactory level of an economic branch should never burden another. However, if we accept the idea that ANAR, according to the law, “sells” the water to hydro producers, then the strategy is obvious: small volume “sales” at a high price.

Introduced in the early 1990s as a charge intended to annoy LA Lakers opponents and subsequently accepted by most states as an important source of fundraising, the Jock Tax became with time a natural thing, something unanimously accepted. Similar to the Jock Tax, the Romanian water tax, initiated as a strange yet decent tax meant to raise funds for development of hydro projects, turned into a punitive measure (considering its value), and was willy-nilly implemented by hydro power producers.

Andrei Covatariu has a bachelor’s and a master’s degree in Nuclear Engineering at Politehnica University of Bucharest, as well as a master’s degree in Business Management from the Bucharest Academy of Economic Studies. At the moment he is a Ph.D. candidate, studying management of the national power system, at the Academy of Economic Studies. Since January 2014, he has been an Energy Sourcing Engineer at Enel supply companies.

This material was firstly published on www.enpg.ro. The Energy Policy Group (EPG) is a Romanian nonprofit, independent and non-partisan think-tank specializing in energy policy, market analytics and energy strategy. EPG’s regional focus is Eastern Europe and the Black Sea Basin, yet its analyses are informed by wider trends and processes at global and EU levels.
Download PDF