EU energy ministers express strong support for the European Green Deal as an essential part of the EU’s recovery strategy to respond to the Covid-19 crisis. The European Commission was asked to maintain its high level of ambition and proceed with its agenda of planned initiatives, such as the smart energy sector integration strategy, renovation wave and offshore energy strategy.

A Clean Energy future must be at the heart of Europe’s recovery from the crisis, the European Commissioner for Energy, Kadri Simson

“We must use this moment as an opportunity to accelerate the progress towards our climate neutrality goal”, said the European Commissioner for Energy, Kadri Simson. “The Green Deal will be at the heart of that plan and energy will have an important role to play”. The same appeal was repeated in a message posted on Twitter by the President of the European Commission, Ursula von der Leyen. “ We can turn this crisis into an opportunity to rebuild our economies differently by investing in renewable energy, clean mobility, energy efficient houses.”

The national energy and climate plans were also discussed, and the Commissioner passed a clear message regarding their importance in delivering the energy union and the European Green Deal, insisting that those Member States still not having presented their plans should do so without delay, writes a press release from the Commission.

Besides Germany, Ireland and Luxembourg, Romania is among the last European countries that have not yet submitted to the European Commission the final form of the National Energy-Climate Change Plans (NECP), the benchmark document for the coming decades in the energy field. On the other hand, Romania has decided to sign the declaration on the use of investments in the European Green Deal as a key element in the European Union’s recovery plan, Environment Minister Costel Alexe announced. 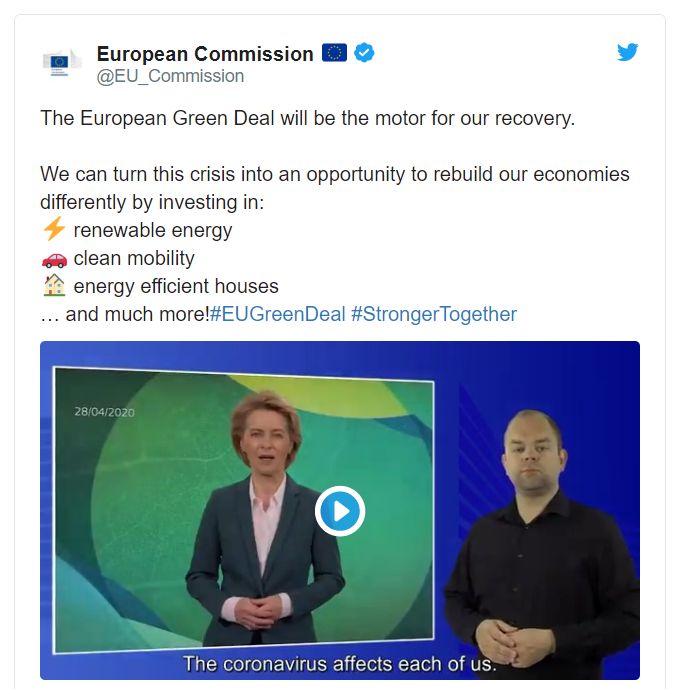 “We sign with the commitment and ambition to follow the path of sustainable investments, in a low carbon, high energy efficiency, circular economy, renewable energies and recovery of biodiversity conservation. We will direct EU funds from the European Green deal investment plan towards sustainable investments, which will support the transition to a circular and climate-neutral economy”, the minister wrote on Facebook.