More than in Romanian, the English word for intention preserves more transparently its Latin birth (in-tensio) and the original meaning where in-tention includes a form of tension.

2020 is the year of great projects and plans of intention in Romanian energy, showed the VIth edition of Energy Strategy Summit – New Investment Cycle, an Energynomics initiative. Against the background of major policy re-settlements at global and especially European level (mainly the shifting from energy security and accessibility to the sustainability of energy generation and consumption), the new political configuration in Bucharest, despite its fragility, has proposed in recent 8-9 months many projects in which the inherent tensions are obvious.

We need to advance quickly so that we use of coal in a way that minimizes the impact on the environment. Without serious investment in converting coal-fired generation units into other, less polluting plants, the only solution is to close those that burn coal, in the shortest of time. Defining this short time is hampered not only by ideological differences (“environmental impact is not that great”) or idiosyncratic differences (“not even them are in a hurry to close their coal-fired capacities”), but also by the administrative inability to design and implement a transitional plan (cumbersome legislation, limited expertise), as well as the lack of a clear perspective on financing sources. The money for just transition is promised, but they cannot be accessed yet, and European funds for modernization and/or innovation will only be available in a year or two. Until then, social problems discourage most of firm policy approaches.

Transition solution or not

Natural gas is the first among the alternative solutions, given its energy density, Romania’s resources and the tradition of the industry. But there is no clear prospect for unblocking exploitation in the Black Sea – the main hope for exiting the pathway of “natural” annual reduction of domestic production. Stiff institutions continue to stall in attracting new players in the onshore upstream segment, with the launch of a new round of tenders for concessions delayed each semester. The European Green Deal threatens the prospects of recoverin new investments in raw material production and converting hydrocarbons into electricity and heat.

Who pays for renewable energy

There is an agreement, in principle, that we need more renewable energy, but we are far from a general agreement on the amount of new investments needed and even further away in respect of assessing their impact on the stability of the national energy system. Granting new subsidies seems to be out of the question now, but we lack the financial instruments that have proved their effectiveness in other countries; the form of a system for contracts for the difference has not been found yet and the acceptance of long-term bilateral contracts by the authorities has not been accompanied yet by clarity in legislation and regulation. As a result, potential investors are delaying large-scale projects. A positive signal comes from industry and large commercial networks, where PV electricity generation solutions are increasingly adopted, as shorter timeframes for return on investment and as the benefits of increased independence from the grid are increasingly understood.

The Black Sea is once again a promise for the coming decades, with power generation from offshore wind sources. However, studies identifying areas where offshore turbine fleets could be deployed are still lacking, as well as financial instruments to encourage large-scale investment.

The improvement of performance indicators in the transport, distribution and consumption of electricity has maintained its pace in recent years, based on operators’ investment programs and on the pressures to optimize economic performance in large industrial groups. The digitalization of processes, smart metering, upgrading of transformation stations and, less so, the replacing/extending transmission and distribution networks are, however, held back by the obsession of securing “sustainable” levels of increases in final consumers’ bills. Politicians imagine what household consumers want – prices that are as low as possible, possibly lower each year, but fail to adopt and put in place a system to define and effectively protect vulnerable consumers; at the same time, large industrial consumers manage to get derogations and support schemes each year, arguing that they are thus preserving local businesses and thousands of jobs.

Investment plans are ambitious, but only in terms of intentions and strategies, because in reality they are based on fragile budgets. The new European budgets are a rescue and they could fuel faster development in all the areas mentioned.

However, there is still present a tension that has been felt for decades in society and, of course, in politics. Modernizing the economy is impossible without attracting foreign investment and engaging in regional projects. At the same time, a public majority, with a variable composition, wants to fully maintain national “sovereignty”. Overcoming this tension is one of the major themes of the forthcoming period.

Finally, Romania seems to be back on track to implement free markets in both the gas and electricity sectors. However, the temptation of controlled prices remains, with adverse effects on investors’ ability to forecast the timeframes for return on their investment.

But the most serious tension is the one that comes from politics. In the middle of the election period, the tension between the government (the National Liberal Party) and the Parliament (still dominated by the Social Democratic Party and its allies) is preventing any serious prognosis about when the updates and reforms now presented as intentions will become solid realities. What we know is that a decision on the amendment of the offshore law is postponed to 2021, pushing a potential investment decision in the more promising perimeter even further away in time. Key decisions on the institutional reorganization of the National Agency for Mineral Resources, as well as the adoption of new laws regarding electricity, thermal power and energy efficiency, are also postponed.

Therefore, we will have another half year of tension before the parliamentary elections; at the same time, we have the hope for long-awaited clarifications at political level, with four years of stability in the Parliament and Government. 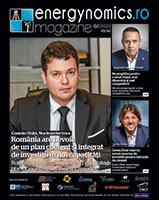 With this occasion we also launched the second issue of Energynomics Magazine in 2020. Another 184 pages, fully bilingual format and attractive design, capturing the trends and essential themes in the Romanian energy industry: news, analyses and opinion from personalities directly involved in the decision of the regulators and the most dynamic companies. This issue is featuring among others articles and interviews with Cosmin Ghiță (Nuclearelectrica SA), Horia Adrian (Holcim România), Augustin Oancea (Tinmar), Martin Moise (PATRES), Oana Mogoi (ING Bank), Adrian Moldovanu (GreenCells), Corina Popescu (Electrica SA).

For the first pages of the current issue of Energynomics Magazine (June 2020) enter the dedicated webpage, where you can also read the full content of all previous issues. For ideas, comments and editorial contributions, or commercial cooperation we encourage you to write us at office at energynomics.ro.

If interested in receiving the next issues of Energynomics Magazine, printed edition, we encourage you to write us at office at energynomics.ro to include you in our distribution list.